I’ve just been hopping here and there in new old stories and it’s a delightful romp—fluid, dryly humourous, innocently laying out the scene and the action and the character of the “actors” and just letting events flow. It’s as if the reader is going on the trip at the same time as the characters. Excellent metaphors, pungent little asides. In Pop Songs, loved the acid trip, especially Mother’s reaction. Gone to Mars, outstanding the way it’s constructed and how you bring it to a close. I’m treating myself to your stories one at a time. Initially I was gobbling them up but now am almost finished and then plan on reading them all again. - Derek S.

Your book arrived on a rainy Saturday - perfect day for the surprise of  a good book to appear. Have been pacing myself with it - don’t want a very good thing to end too soon. - Robert G.

5.0 out of 5 stars  Put this book at the top of your list to read!!! This is a wonderfully funny book...a feel good read...the characters are hilarious and the stories could belong to any one of us.....Once you start you won’t be able to put it down...I loved it!!! - Oceangirl

I can’t tell you how much I enjoyed your ‘stories’. Many of them brought back echoes of memorable episodes in my own life or in the lives of close friends. I just wished you had shared with us several more having read your book in one sitting. Your last story had me a bit puzzled though until the very last line when I burst out laughing picturing a nice young man “leaving Finn’s house carrying a television”. I laughed at several other twists in other stories.Your book is a gem which I’m about to reread and will strongly recommend to all my friends. - Frank L.

Truthfully it was different than any book I’ve read. I loved all the places you/Seh went in each story. I also loved that once I started each short story...I could not put the book down until I finished that story.  Beautifully written...describing in great details and from a different perspective than mine, and I liked that! It is a little bit twilight zone on some stories and I liked that too. I liked this book very much!! - Diana K.

Very poetically leads the reader toward accepting death while ego’s death occurs simultaneously. It reminds me of Jean Cocteau’s films. Magic and uncertainty and fairytale but very sweet and poignant while pleasantly disturbing. - Robert Z.

Posted by Rand Gaynor at 6:56 AM No comments:


Here is a great review of New Old Stories in Wayves: The voice for the lgbtq community in Atlantic Canada. http://wayves.ca/node/394

I was initially doubtful when asked to review Rand Gaynor’s New Old Stories. Being neither a literary scholar nor a fiction writer, would I have anything useful to say? Reading short stories, however, is a bit of a passion, an enthusiasm honed decades ago when my first fulltime job at the Nova Scotia Hospital required two bus rides plus a trip on the ferry: what better to occupy travel time than reading a story one could finish on a single leg of a commute?
When I first picked up New Old Stories, I read through all 12 stories in one go, although one could certainly read them over time, each being complete in itself. My first impression is that these are the product of an imaginative writer with an excellent grasp of what makes a successful short story. The writing is uniformly good, at times quite beautiful with sentences one wants to savour. Gay themes, with a changing set of characters, run through the stories. There are other common motifs as well, change and loss prominent among them.
One central character is a link among the stories, the rather coyly named Seh Goodnight. Has Gaynor perhaps written a novella rather than a set of short stories, or perhaps a novel literary genre somewhere between the two? With this thought in mind, I reread the collection, several times in fact. This is one of those instances where—good as each individual story is—the whole is more than the sum of the parts.
The first story (chapter?) introduces Seh as a youth. He is already looking beyond his home, thinking of places far away, places he fears he may never visit as “ordinary people from here usually don’t go that far away”—but, far from ordinary, later in life he will.
In one of my rereadings, I focused specifically on what I could find out about what Seh was like. One learns of his changing tastes in music, the various places he has lived and to which he has travelled, and of his constantly changing group of friends and acquaintances. Yet oddly at the end one still knows relatively little about who he is as a person.
While he appears in all of the stories that make up the main section of the book, he is seldom the main actor. Indeed he appears to be essentially passive, responding to others’ needs and requests. He is present when interesting and unusual things happen, but they are seldom initiated by his actions and don’t usually happen to him directly. And it is never clear if or how he is changed by them. During the rereadings I looking for clues about Seh, but could never really develop a picture of who he is, although I assume this is a conscious decision on Gaynor’s part.
Such careful reading leads one to realize that it is the auxiliary characters who take centre stage. It is they who initiate and are the focus of the action. Gaynor has an impressive capacity to bring these people alive, often in a few deft strokes or a single telling action, as for example the grandfather in “Stupid Old Man”, Barry in the eponymously named chapter, or the mother in “David Star and the Fallen”. Few of the characters are happy and balanced, but one does not expect that in a short story. In thinking about many of them I was reminded of a comment a patient made to me at the Nova Scotia Hospital: “I could be perfectly happy if I could go away and leave myself behind”.
Having enjoyed the stories the first time through, their complexity compels one to go back and focus on a specific theme: the forms that loss can take, the ways that one can listen to music and the reasons for doing so, for example. New Old Stories is a collection that rewards rereading. Outwardly simple, the inter-linked stories are a testament to the richness of the author’s imaginative life.
Posted by Rand Gaynor at 10:37 AM No comments:

Young people sometimes ask what it was like “before.” This is where Seh Goodnight’s journey begins, in a world of cis-gendered gay and bisexual guys, a large, active subculture before gay activism arose, before AIDS, before Pride, before the emergence of lgbt+.
In Stupid Old Man, set in the mid-1960s, Uncle John and Candy are handsome “room mates” living together in the same closet. Seh, captivated by Candy’s flirting, imagines their lifestyle for himself, perhaps his first realization that he is gay. In Pop Songs, he fantasizes about the perfect boyfriend who hasn’t yet materialized, and later in the same story, reminisces with another 60s classic soundtrack about the perfect one who did show up, however briefly.
As Seh’s gay world evolves, frequent casual sex becomes almost a requirement, often delightful and sometimes dangerous, as he discovers in a “hippy love nest” in Barry in Absentia and in the creepy Hôtel des Anges. In She’s Making Pancakes, gay clubs and hookup bars have appeared. Slave masters have dungeons in their suburban basements. Cliff and Rico do manage to maintain a long-term relationship, although one wonders how, in Happy New Year!, where we also meet the adorable gay-but-not-quite-out-yet pupcake, sweet Brian Sweet.
Seh’s gay world has its not-so-gay side as well. In David Starr and The Fallen Seh’s friend, David, is a victim of horrific religious persecution. Internalized homophobia is central to Gone to Mars, where Seh has a frustrating relationship with a mysterious bisexual hunk and an anonymous, closeted telephone caller. Then there is bi-curious Eward in Blueberry Fields, and the sexually-active Arthur who doesn’t realize he is dead. But Arthur does get a happy ending, just not the kind he had in mind!

Although the time period of each of the new old stories isn’t really specified, it can be seen by noticing the technology that the characters are using. Stupid Old Man is a road trip in which large folded-paper roadmaps, telephone booths, pizza kits and the discovery of colour TV appear. It can only be the early 60s. In Blueberry Fields the “three guys dressed as a rock band” play Hotel California, setting the story in the 70s. In She’s Making Pancakes, landlines and answering machines are in use; in Hôtel des Anges, cruising by laptop is in full swing, but smartphones haven’t yet appeared. Finally, in Marseillan Plage, Seh  avoids “opening emails and texts and voicemails, avoiding notifications and updates and other relentless demands,” and experiences a shocking epiphany.
Posted by Rand Gaynor at 10:54 AM No comments:

What's with the cover on New Old Stories? 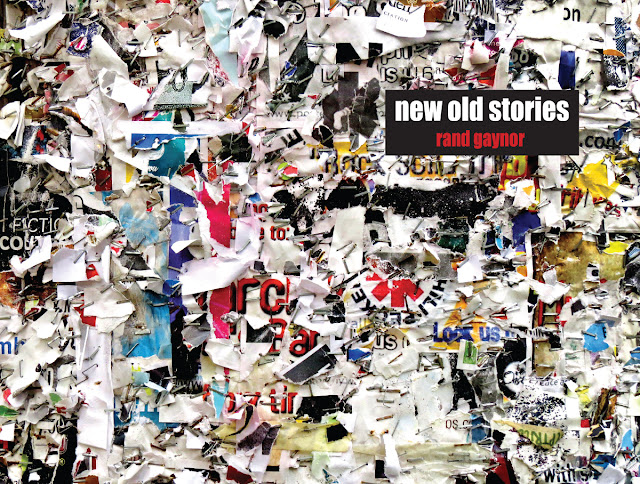 On its cover, a photo of a much-used bulletin board illustrates how New Old Stories came about--bits and pieces of real and fictitious events being stapled together as short stories. Unlike a traditional book cover, on New Old Stories there is no text on the back, no hooks, blurbs or reviews. The cover is used simply as a wrapping paper that holds the stories together.

On the front cover just under the title, one can see an opening that reveals a deep, open space underlying all the clutter. If we are able to see through our mental clutter, we might find the peaceful, open space in which it appears. Seh Goodnight often notices this, in the most unlikely situations.
Posted by Rand Gaynor at 2:14 PM No comments:

“...sweet and poignant and funny as all get out...

dark and edgy...lyrical and pastel...

Posted by Rand Gaynor at 1:22 PM No comments: